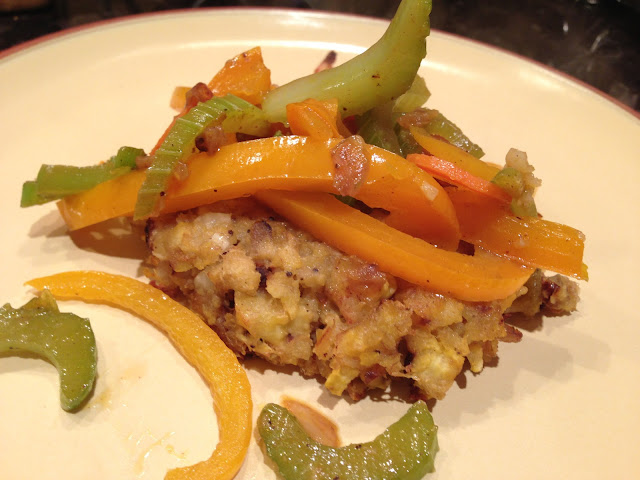 Two weeks ago I was in Puerto Rico for a few days. It was difficult for me because I am a vegetarian who doesn’t eat fish and generally, the food in PR is very heavy on the meat or fish. We had been warned not to eat fresh vegetables because they would have been washed in local water that the delicate bellies of Canadians might not be able to tolerate. While there, I heard of several incidents of people throwing caution to the wind and ending up in their bathrooms for hours on end.

If the vegetables and fruit had a peel on them and the peel was removed, they were considered safe. So I existed on cucumbers (peeled), oatmeal, protein bars that I brought from home, melon, and bananas. By the end of the 5 days my stomach was a mess.

On the last night of the trip, we ate in a restaurant on the resort grounds and it was the first meal that everyone really enjoyed. I was a bit put off when I first looked at the menu because again, it was full of meat and fish. I spotted some rice and beans so I ordered that, but was informed that the beans actually had pork in them. I asked the very patient waiter if there was anything at all on the menu that I could possible eat. He responded with one word: mofongo.

Mofongo is essentially fried plantain with garlic. http://en.wikipedia.org/wiki/Mofongo It has a texture not unlike potato, and the flavour is mellow and basically takes on the flavours of whatever it is cooked with. I had never had plantain before because I always assumed it would be sweet like bananas. I could not imagine something as sweet as a banana in a savoury dish, but plantain is not really sweet at all. Traditional mofongo contains pork (what a surprise), but the waiter assured me that the chef could make a true vegetarian mofongo for me. I decided that it would be good to try a traditional Puerto Rican dish at least once before leaving town, so I ordered it. It arrived in the form of a tower. The tower was hollow and inside was filled with overcooked and slightly bland vegetables. Aside from those vegetables, it was delicious.

Here is a photo of my Puerto Rican mofongo (apologies for the blurriness): 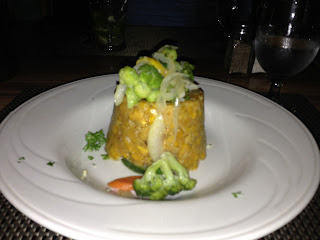 As soon as I returned to Toronto I did some research on mofongo recipes. One of my thoughts on the version I ate in PR was that it was a bit dry. The waiter explained to me that if I had ordered the meat or fish version, it would have come with a sauce. Because the veggie version was made specifically for me (and one other colleague who is also a vegetarian), there was no sauce. I decided that for my mofongo I would add caramelized onions since they make everything better. I also figured the oil from the cooking of the onions would add some moisture to the dish.

I also topped my mofongo with sautéed veggies, but for my version, I added water to the pan near the end of cooking to make the veggies saucier (almost like a broth). This worked well but for the next time, I think I will make a separate veggie broth to just ladle over the entire plate before serving. My husband, who is not a vegetarian, ate his mofongo with au jus on top (he happened to be making a pot roast at the same time and so he took a ladle of the jus and used that to moisten the mofongo. He had two helpings.)

I got my eldest son to try to mofongo and he thought it was pretty good. This leads me to believe that I could form the mofongo mash into French-fry shapes, “batter” them with egg whites, and double bake them to make them like crispy French fries. This will be my next recipe test so stay tuned for that.

In the meantime, here is how I made my mofongo. The recipe I used as inspiration was from http://suite101.com/article/adventurous-cooking-vegetarian-mofongo-a105334 . My only comment on this web recipe would be that the instructions were not 100% clear. Hopefully my instructions below will be easier to follow.

Ingredients:
This recipe will make 4 – 5 mofongo patties. Enough for a side dish for 3 – 4 people, or a main dish for 2 people.

2 green plantains, peeled and sliced (note that you have to use a paring knife to remove the peel – it doesn’t come off cleanly as with a banana because the fruit is unripe)
½ tsp salt
2 cups cold water
2 cloves garlic, peeled and left whole
1 medium sweet onion, diced
Olive oil (or vegetable oil) for frying the plantain
Salt and pepper
Yellow, red, orange peppers (your choice), sliced thinly
1 stalk celery, chopped
1 carrot, sliced thinly
1 clove garlic, crushed
Feel free to add additional veggies if you have them on hand (perhaps zucchini, mushrooms, broccoli, cauliflower, etc.)
Water
Vegetable bouillon cube (if you opt for the veggie broth on top)

Method:
Soak the plantains in 2 cups cold water and ½ tsp salt for 15 minutes. Drain in a colander and pat dry with paper towel. 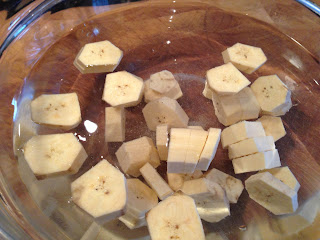 Heat the olive oil in a sauté pan at medium high heat and add the diced onions and whole garlic. After about 5 minutes, add the sliced, soaked, drained plantain. Fry the plantain on each side until golden brown (about 10 minutes). 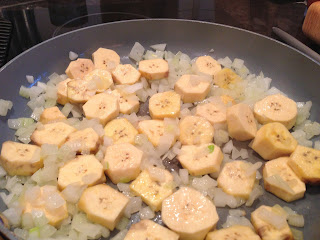 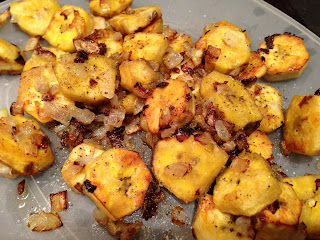 Remove from heat and let cool for a couple of minutes. Pour the contents of the pan onto a chopping board and roughly chop it all up. Thank you to my husband who did this for me. 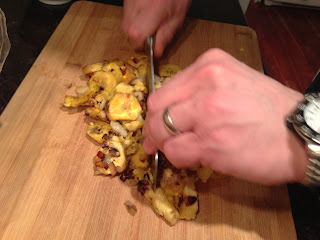 Transfer to a bowl and use a potato masher to mash it all together.  Add water or broth to make the mixture easier to handle - it will be dry. 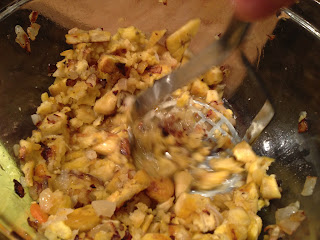 You can eat the mofongo now, or you can fry or bake it again to crisp up the outside. Before you crisp it up, make your sauté of veggies.

Heat some more oil in a pan (or use cooking spray). Sauté the onions and garlic for about 2 minutes at medium high heat, then add the celery and carrots and sauté for another 2 minutes or so. Finally, add the peppers and other veggies. Near the end of the cooking add about a cup of water to deglaze the pan and make a bit of broth. Add some salt and pepper and other herbs if desired. I didn't add any wine but I suppose you could to add deeper flavour. 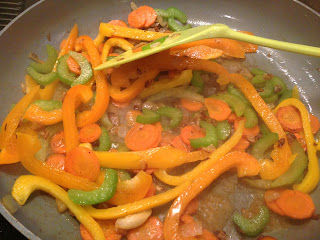 Use a vegetable bouillon cube and some boiling water to make an additional broth on the side. Do not add this broth to the veggies as it will make vegetable soup which is not really what you are going for.

To crisp up the mofongo, the recipe I consulted (website above) suggested making small balls of the mixture, flattening the ball into a patty, and either frying it in the same pan or putting it in the oven on a greased cookie sheet (250 degrees for 5 minutes). I opted for the cookie sheet/oven option but found there was no way this was going to crisp up in a 250 degree oven. I ended up raising the rack and broiling at 500 degrees for 1 minute per side.

These are my mofongo patties before being baked. 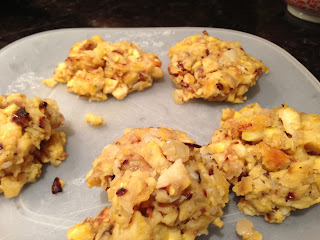 Place the mofongo patties on a plate, top with the sautéed veggies and broth. Serve while hot. If you are serving as a side dish, you can top it with whatever sauce you are serving with your main. 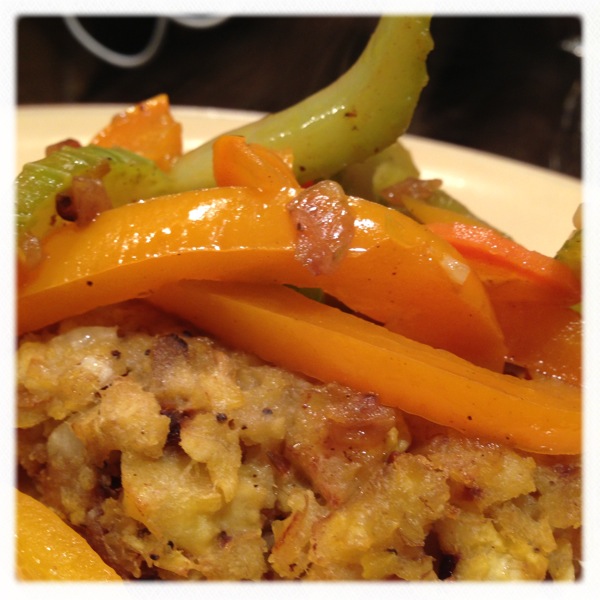 Posted by Dvorah Richler at 9:53 AM